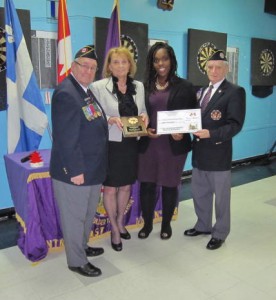 Thaïna serves with 233 St-Étienne Royal Canadian Sea Cadet Corps in Rivière-des-Prairies (Montreal) and is currently a civil instructor with the corps since aging out in 2012 with the rank of Chief Petty Officer 1st Class.  She earned her ANAVETS Cadet Medal of Merit in the Music Instructor Course at RCSME in 2010 and as a cadet was also selected to be part of the international exchange in Australia, has been awarded the Strathcona Medal and was a finalist for the President’s Trophy given for top cadet in the Eastern Region of the Navy League of Canada and received the citation of the Lieutenant Governor.

She is currently attending the University of Montreal studying towards her bachelor’s degree in Nursing and is still involved in many community activities.  Of her experience as a cadet Thaïna states, “Cadets has helped me to know my strengths and weaknesses as well as the tools I have to improve.  This program has made me grow in all aspects and has allowed me to become a better citizen.

The Kossa Memorial Scholarship is eligible to recipients who have earned the ANAVETS Cadet Medal of Merit and are pursuing post-secondary education leading to a degree or diploma.  Approximately 65 medals are earned annually by top cadets on specific courses at cadet summer training centres across Canada.  The 2012-2013 winner was CWO Julie LeBlanc, a member of the 560 8th Canadian Hussars RCACC in Moncton, NB.  She was also the 2012 Walsh Sword recipient as the top army cadet in Canada.  Julie earned her ANAVETS Cadet Medal of Merit in 2010 at the Whitehorse CSTC on the 6 week long Cadet Leader Instructor – Adventure Course.  The 1000.00 scholarship will help he continue her studies in health sciences at L’Université de Moncton.

Cadet Albert earned his ANAVETS Cadet Medal of Merit in 2006 as top cadet in the advanced music levels 4-5 at the EMCRE (Regional Cadet School of Music Eastern). Currently, Cadet Albert is pursuing a degree in Music at Université Laval.

ANAVETS is pleased to announce the 2010-2011 recipient of the Col. Frank Kossa memorial scholarship as Eryn Wahl of 903 Strathmore Air Cadet Squardron. Cadet Wahl is currently pursuing a bachelor’s degree in International Relations at the University of Calgary. She has a love for people, for travel and for new and different things. This degree is helping her to unite those interests. Focussing on Latin America and the Spanish language she would ideally like to work with an NGO or Aid Organization that is operating within Latin America.

Eryn states regarding he experiences as a cadet, “Throughout my years in cadets I attended the aircrew survival course, Survival Instructor, and I had the opportunity to spend a summer staffing for the Cold Lake Survival School, my last summer in cadets I was chosen to be a part of the exchange to Australia. Attending and preparing for these courses taught me self discipline, confidence and what it truly means to be a part of a team. I have had some unforgettable experiences through the cadet program, such as riding in a helicopter, touring the RCMP depo in Regina and petting a Kangaroo at the Australia Zoo, however I think the most valuable things I have gained through Air Cadets are lasting friendships and a sense of what it means to be Canadian.”

Eryn earned her ANAVETS Cadet Medal of Merit in 2004, as the top cadet in the Survival Instructor course at the Greenwood Cadet Summer Training Centre in Nova Scotia. The Wahl family is actually somewhat famous in our circles with Eryn being the first sibling to achieve the medal, only to have her brother Philip also win in 2008 and both Philip and younger brother Robert earning the medal in 2009.

The Wahl family is the only one to have three different siblings earning the Cadet Medal of Merit in its history thus far.

The 2009-2010 recipient of the Col. Frank Kossa memorial scholarship is WO2 Alexander matchem of 537 Gander Air Cadet Squardron. Cadet Matchem is currently attending Memorial University in St. John’s , NL working towards his undergraduate degree in Engineering. He originally won the ANAVETS Cadet Medal of Merit at the Greenwood CSTC in 2006 for best overall cadet in the Survival Instructors Course.

The 2008-2009 recipient of the Col. Frank Kossa memorial scholarship is Stephanie Plante-Blanchette who received her ANAVETS cadet medal of merit in 2005 at the Cap-Chat CSTC in Music. She is an army cadet with 2649 de Salaberry RCACC and is currently studying health sciences at college de Bois-de-Boulogne.